The revised and expanded edition of Petty Gods is now available, so here are a few of the entries I wrote for it back before this site even existed.

(I mainly just want to show off bigger versions of Rose’s illustrations because they’re excellent. Everything but the goat is hers.)

The Divine Worm, Mother of the Stillborn 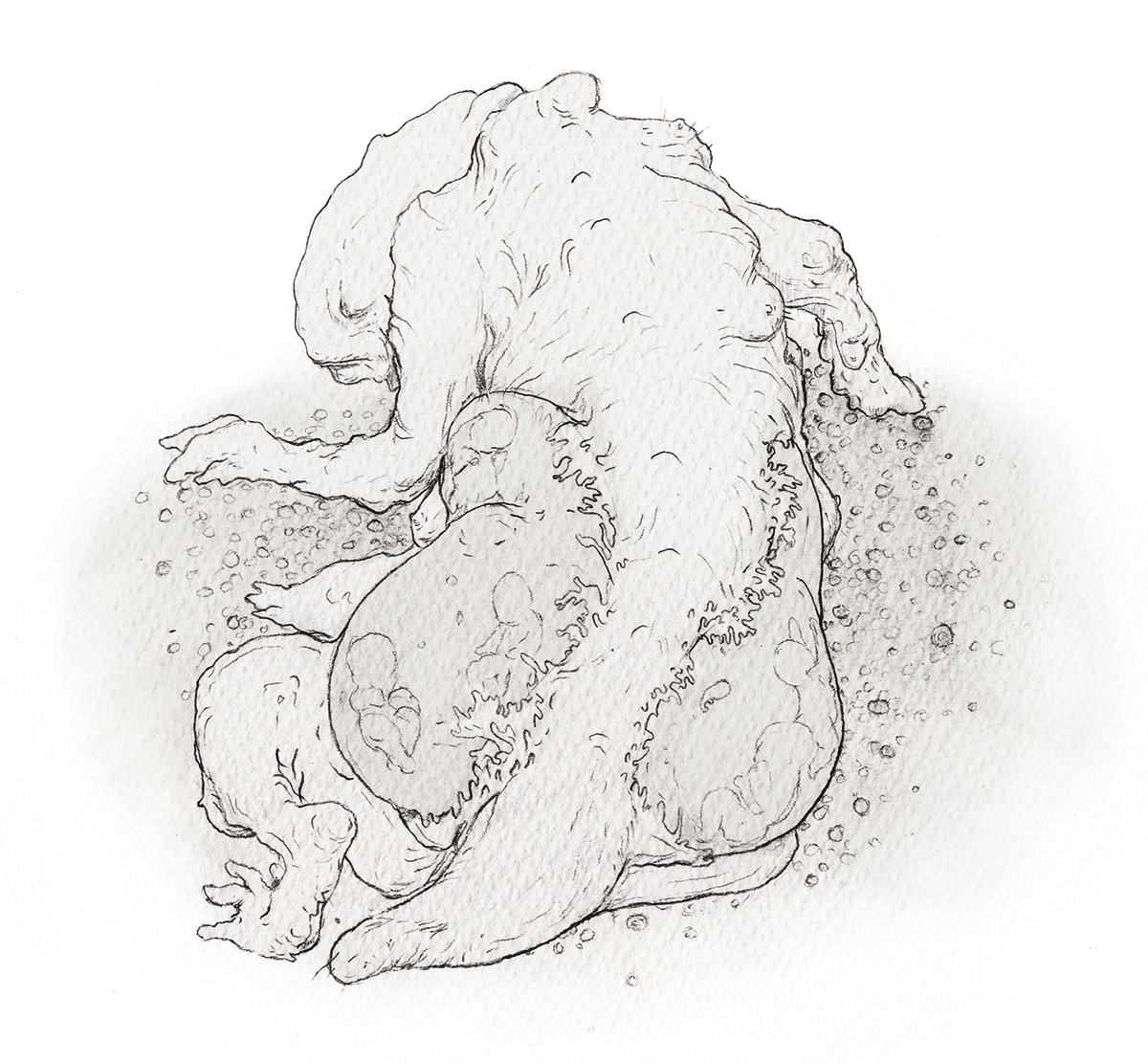 Symbol: An x-ray style depiction of an earthworm holding multiple foetuses along the length of its body.

Talisman: A gold piece stamped with a newborn’s face, eroded by tears.

Save: As Fighter of level equal to HD rolled.

The Divine Worm, patron Mother of Miscarried and Stillborn Children, invoked by grieving families, worshipped by others for reasons that are their own.

A coin is cast bearing an image of the child and melted in a boiling pot in offering to the Divine Worm, beseeching her to carry the child in the beyond.

Manifestations of the Divine Worm are sometimes found in fragrant caverns below sites of plague or infanticide.

In form the Worm’s body is like that of a giant hairless and eyeless mole, lined with damp axolotl legs and a toadlike mouth. Pendulous breasts appear almost at random on its flanks and legs and a swollen amniotic sac sprouts over its lower back and hindquarters, within the sac you can see neither flesh nor bone, it sinks forever. Floating calmly amidst the rotten amber fluid are more infants and foetuses than you can count.

The Worm sits atop a gleaming pile of gold coins, swaying lichen and moss hangs from the cavern roof above it.

The Worm never attacks, never defends itself. It sits there with its mouth open, hundreds of infantile heads emerging and weeping in chorus even as you hack into its flesh, the sound is almost soothing. Every round save vs. Poison or suckle from one of its breasts. The sac squelches and heaves as you drink its amber nectar. You age d6 years of life unlived.

If the worm is killed its sac will burst, spilling 253 stillborns per HD about your feet, there are so many more than you imagined.

The Lady of Tasks Forgotten 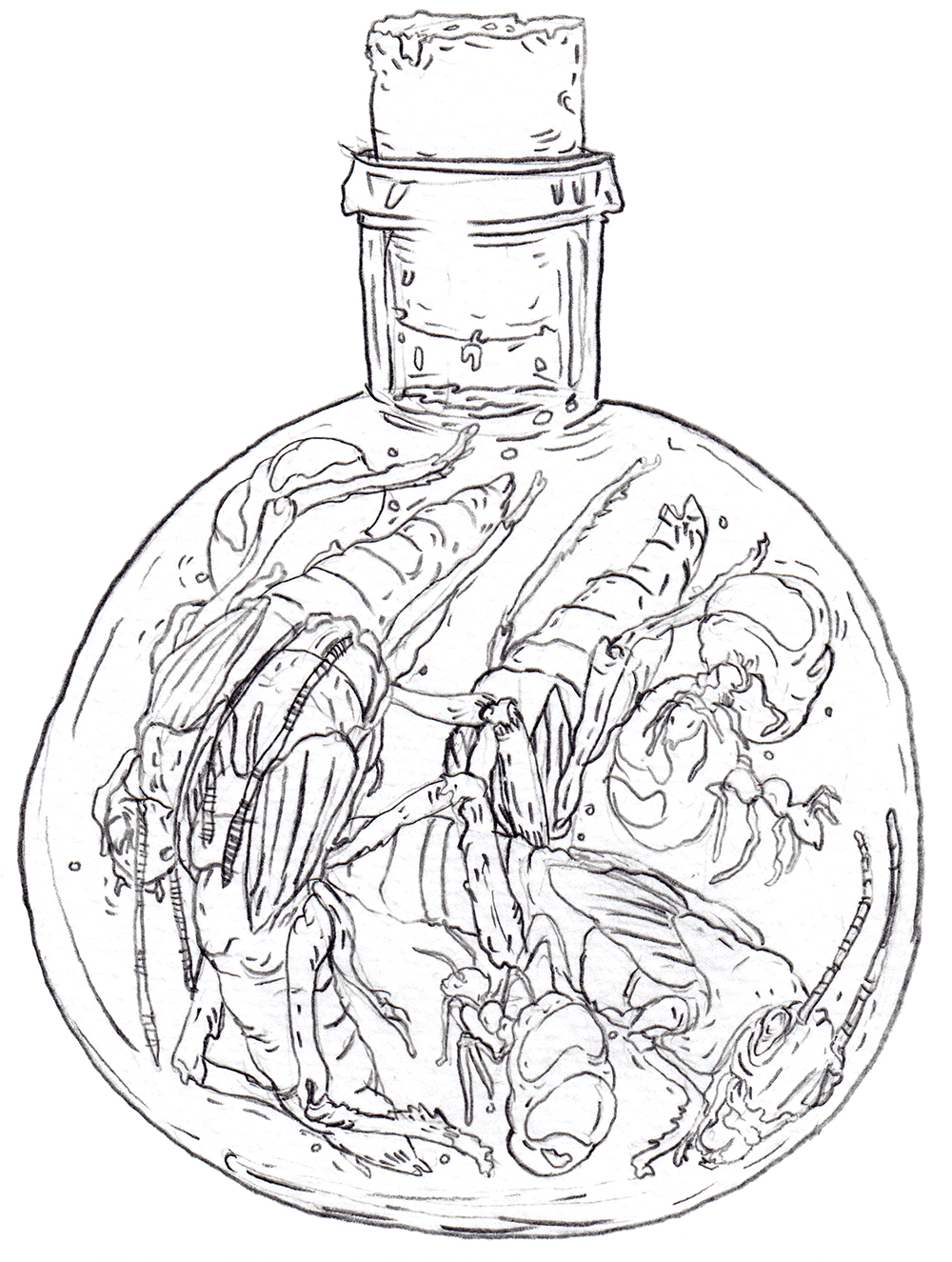 Symbol: A bottle filled with the faces of dying ants and locusts pressed against the glass.

Talisman: N/A. Most of the time her adherents aren’t even aware they’re adhering.

You settle in and try to block out the din of the tavern, contemplating your next step, weighing the options.

A tankard slides beneath your nose, the frothing ale spills slightly onto your hand.

There’s nothing extraordinary about the waifish woman who put it there, she’s pale and without a curve, or is she terribly obese under that dress? You’re too preoccupied to really notice.

She smiles pleasantly but emptily, “You look worried about something, burdened, why don’t you tell me what’s bothering you so much.”

You tell her everything, every twist every turn, you tell her everything there is to know about what you’re trying to achieve. And you do feel better for it. You feel fantastic, purged and light, and someone has left a full tankard of ale here on the table for you. Wait, what is this place?

The Lady of Tasks Forgotten can be called on by those who have lost their way, those that feel there was something important they were meant to do but can no longer recall. The elixir they prepare probably shouldn’t be consumed under normal circumstances, distilled liquor and locusts flavoured with datura, poured into a flask with live winter ants, already kept in the flask for days and belly-deep in secreted poison.

If they survive drinking this concoction they will remember the task without fail, but it is rarely their own, and they will never understand that it never was. The Lady has many tasks to remember.

You could likely kill the Lady quite easily if you desired, but how would you know her?

If you find a way to summon and bind her, her flesh softly broils and churns, melting in places while expanding in others, forming impossible beauty then rotting like a bed sore. She looks on you with such sympathy, you have so many troubles.

Every round that you are near her in this state you will forget something, save vs. Magic for it to be something unimportant.

Use the table below for important things or pick something the character will really miss.

She has no gold to steal, no relics, and whoever kills her will absorb every task she still held, convinced beyond question that the tasks are their own, crippled by overwhelming responsibility.

The Turquoise Idol of Communion 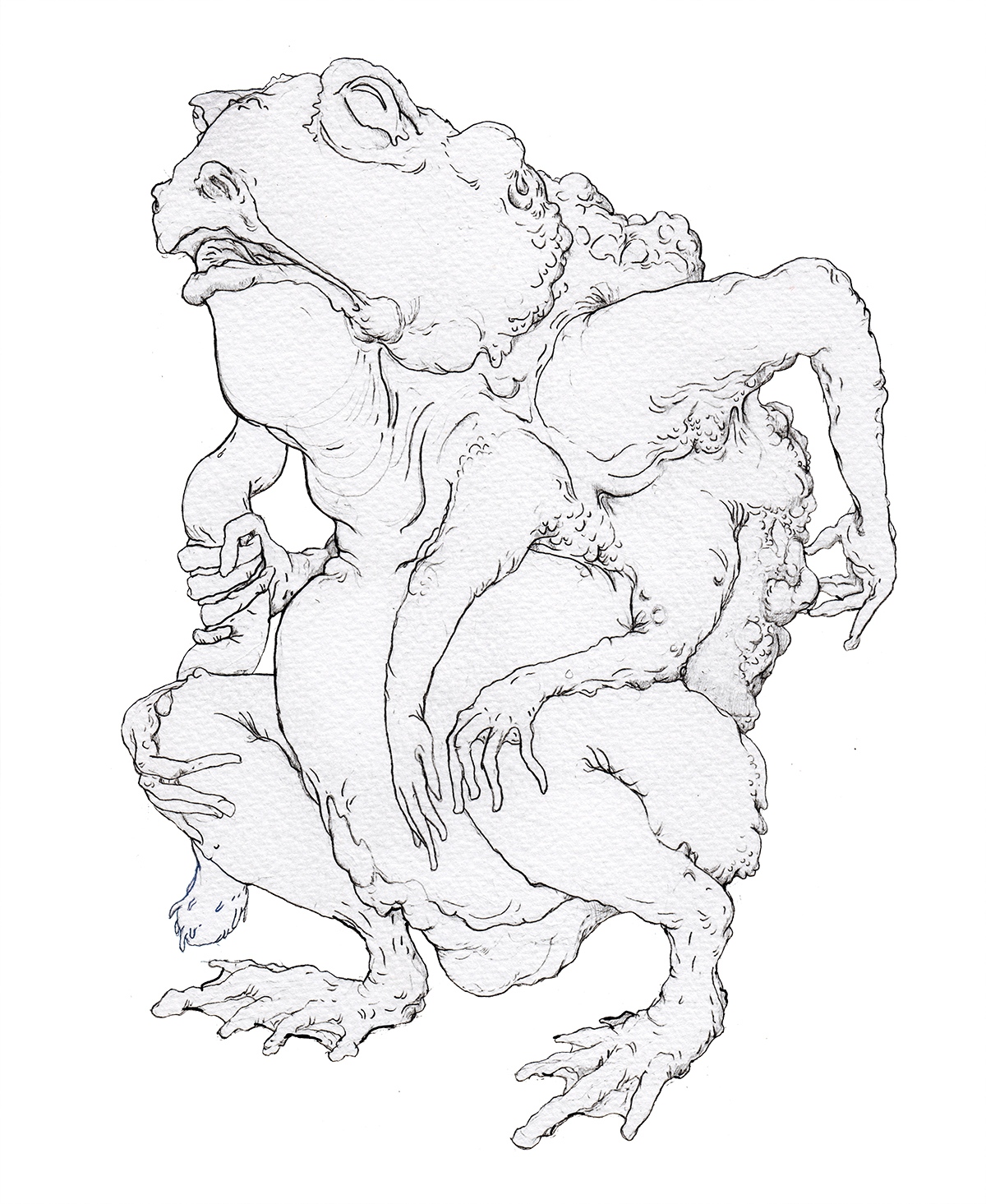 Symbol: Imagine the purest light and assurance, it looks like that.

Save: As Fighter of level equal to HD, immune to all Magic.

Hoard Class: 500 river-polished pebbles of turquoise inside its belly per HD.

They hand you a piece of broken stone, the outside is timeworn and dark, graven with symbols, while the alluring turquoise surface within glistens like an adhesive.

They speak of four joining pieces that were lost, they say that if you reconstruct the idol it is told to strengthen your mortal shell, to unite you with a greater power.

The inner surface of the idol is dry to your touch but when you join it with another piece you find yourself unable to force them apart. Every piece amplifies the stench of the swamp wafting from it.

You find and join the final piece and place it before you, ready to receive its power. A wet blue skin seeps from the fine cracks on its surface, smothering it and expanding as a toad in the shape of a man, with five hanging arms protruding from its body. Its skin glistens and it wishes to join with you.

The only attack it will make is a wrestling check, either by leaping at you or with its 10′ tongue. The moment it takes hold you can feel your skin incorporating into its body, sucking you in. Take a -2 penalty to your rolls every round, taking damage equal to your penalty if you manage to escape, and incorporating into the toad completely if you haven’t escaped after 3 rounds. With its increased mass the toad gains a HD, sprouts another arm and a further bonus to wrestling checks, and its tongue grows another 5′.

If you hit the toad in melee your weapon sticks in its flesh, make a Strength check next round to get it back. The toad will try to grab anyone that comes near enough, or with its tongue if no one is already in its mouth, but won’t move until it has finished incorporating those already joined to it.

You will never completely remove its flesh from anything it touched. 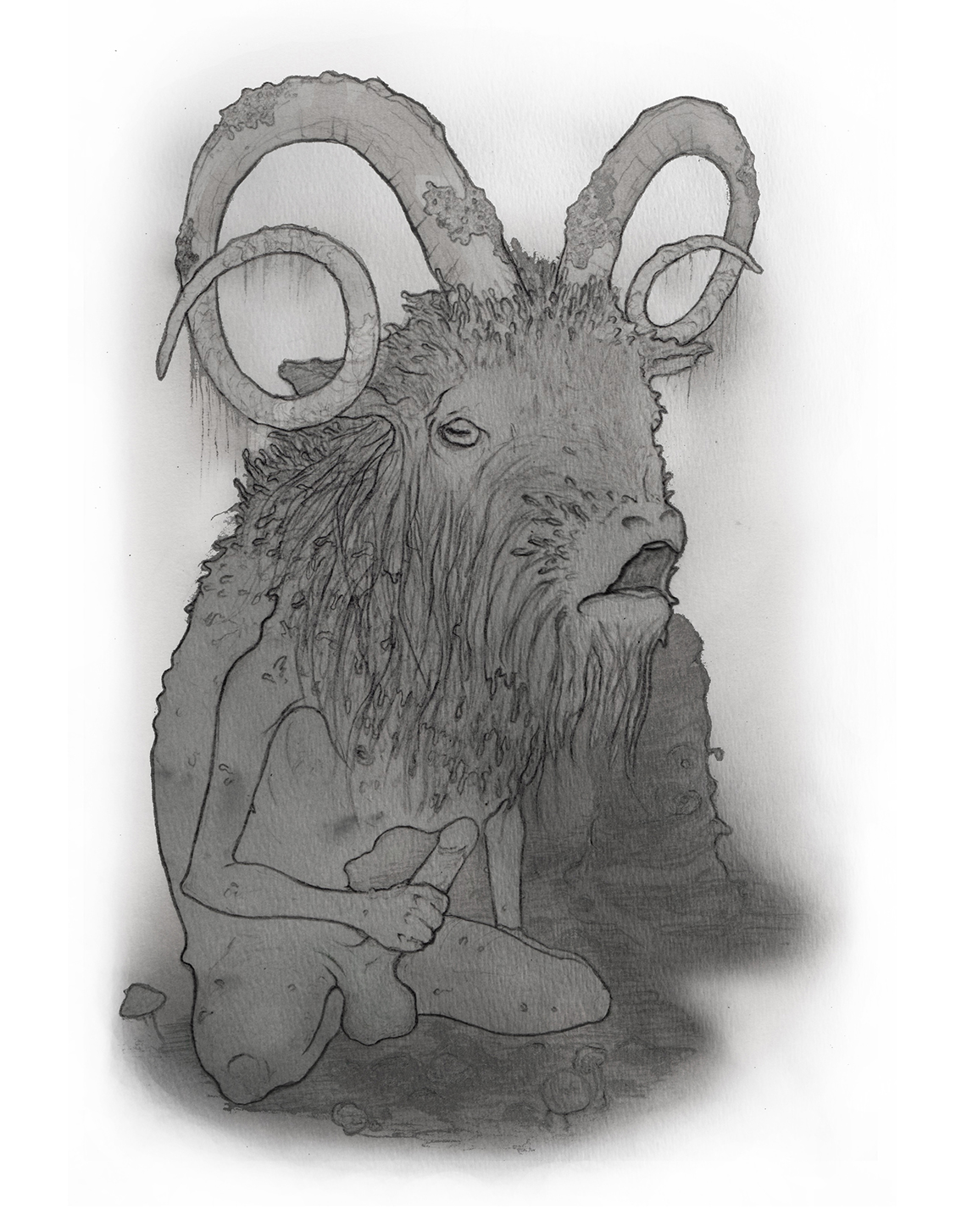 Symbol: The head of a goat crying tears of sperm.

Hoard Class: That depends on how long you keep him around.

The Moss-Worn Goat can be called upon to dry up the seed of men seeking it or those whom they wish to inflict it upon.

Offerings of gold are left in the damp parts of the woods with a phallus carved from a discarded branch, hidden by rotting hollow logs. Some desire temporary affliction, but unless they save vs. Magic they are permanently sterilised.

The Goat himself will be found in a dark hovel of a cavern, sweating amidst lichen and mounded monoliths of dirt, sprawled on the floor, moaning mournfully in a reverberating howl.

Alignment: As the god it currently serves. It’s nothing if not helpful.

Hoard: Find a wondrous item table and roll on it.

The bloated body of the maggot squirms through the air, contracting and expanding towards you, several feet from the ground in deliberate, hypnotic movements.

It draws itself up like a snake, a patch of glistening needles extend from beneath the rear of its body, supporting it before you.

Mouths cover the underside of its body, one speaks for every emotion, there are many mouths. Eyes filled with broiling red fog are held within them, winking out and opening elsewhere as each begins to speak.

It is not the nature of the maggot to harm the god it serves, but when it dies the maggot will swim amongst its flesh, supping on the decay of divinity. Of course the maggot hungers, but the longer a god lives, the more fervently it is worshipped, the sweeter its flesh. You see its conundrum.

It feels you’re here to spoil the meal it is cultivating.

Static physical barriers mean nothing to the maggot, it slides in and out of them like reality, be careful not to fall into a hole that isn’t there. Sharp swinging metal is harder to account for.

In combat the maggot will try to wrap itself around you with gnawing mouths and squirm away in one fluid motion, leaving you like a ringbarked tree.

If caught or cornered its skin bursts with patches of bristling needles.

The maggot’s digestion is slow, if it is killed there is a 50% chance of its ruptured belly releasing the power of a god it has fed on. Have you killed a god lately? That one. Otherwise roll or flip to a random godling in this book and inflict their wrath.

Some godlings grow as their following does, sloughing off their old skin to make way for a glorious new facade.

The translucent leather stitched into this full-body suit still responds to praise and worship, either of its wearer or of the godling who shed it.

The skin will allow one use of an ability of the godling it came from within a period of time equal to hours you spend in ritual worship beforehand.

Pick a god, roll or flip to one randomly in this book, or use whatever horrible thing these abilities came from. Roll randomly or worship twice as long if you want to pick.

1. Swollen pustular mounds swell from the neck of the suit, allowing you to expel boiling black bile as a 6′ ranged attach or a 90° spray within 3′, bypassing armour and dealing 2d6 damage. If you can bite someone you may vomit directly into their bloodstream. Save or Die.

2. If someone makes a successful melee attack against you, you can allow their weapon and arm to pass through your body, trapping them. The arm will need to be cut away, but whatever is left on the suit will be absorbed soon enough.

3. You leech the life out of anything organic within 6′, regaining d6hp. Roll under Constitution or secrete it back out in noisome streams.

4. You regurgitate d4 phlegm-coloured tiny men. Lose 1hp for each tiny man and roll for their loyalty. Every round you want them to do something roll loyalty, you may need to think of incentives. The only way you can regain those hit points is by swallowing the tiny men.

The skin’s AC 8 improves by 1 for every person that worships the wearer like a disciple, as the skin flushes with life and moves in a distracting, unnatural way.

If you gain 14 followers you will fuse with the skin, becoming a malformed bastard demigod. You will not like it.