An Array of Specimens Tagged as NPCs

SO HERE’S SOME PEOPLE YOU MIGHT ENCOUNTER IN YOUR TRAVELS! 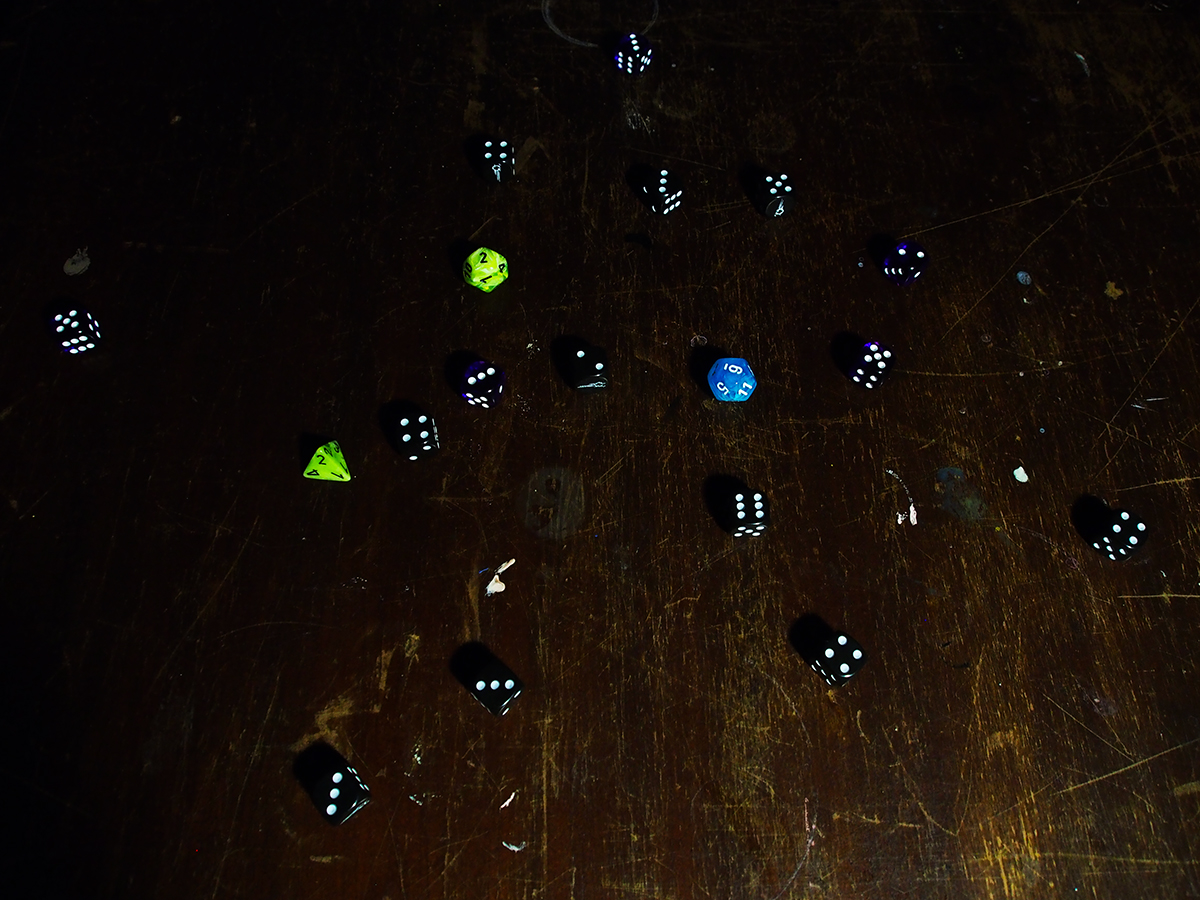 END_OF_DOCUMENT_TOKEN_TO_BE_REPLACED

Sometimes you suddenly need a big group of NPCs, like when you stumble into a brewhouse or swagger into a brothel or a cult abducts you or you accidentally start a gang war. And it’s a lot more fun to say “the big fat one-armed man takes another swing at you with his one arm” than “this scribbled note that says 3hp attacks you again”.

So I made a sped-up version of the NPC Birthing Sacs, complete with names and hit points for when you stab/chat them up, and an editable text box for each one so you can make notes right onto the webpage. Like the Birthing Sacs, the descriptions require some interpretation on your part; I might add more specific character quirks later but for now it’s all sparks.

You can play with this sexy new toy right here, and you’ll find permanent links for both it and the automated Birthing Sacs in the Library and sidebar.

What’s that? What sidebar? If you click the triangle it slides out a secret panel, didn’t you know that?

If for some reason the players ever decide to leave the joys of the Rookery, here’s its closest neighbour.

The Fogwalk, a borough of seaside views, commerce and depravity.

Dockhands going to work, fish buyers with baskets, men with knotted arms and sharp knives removing barnacles from the docks.
Encounter chance 1 in 6 per hour
Overhear Rumour on a 6
Chance of Godless: 20%/Turn

Noon:
Cargo unloaded, goods being shipped out and haggled for, Neophytic Sisters of the Cathedral of Lost Virtue waiting to lead more discerning seafarers back to the Cathedral and away from the Plaza of Earthly Lust.
Encounter chance 1 in 6 per hour
Overhear Rumour on 6
Chance of Godless: 20%/Turn

Night:
Workers leaving, others arriving to unload the night cargo, revellers of the Plaza, Godless night watch.
-2 to reaction rolls unless inside the Plaza
Encounter chance 1 in 6 per hour
Overhear Rumour on 5-6
Chance of Godless: 30%/Turn

END_OF_DOCUMENT_TOKEN_TO_BE_REPLACED


The Rookery of Van Möldus

What better place to start in the greatest city of the new and ancient world than in a slum as a nobody?

This is the Rookery of Van Möldus, a borough of Cörpathium that you could probably use as a city all to itself if you really wanted to.

Morning:
Drunks waking in the street with barnacles clinging to their flesh, the occasional fog-bloated corpse, beggars and waremongers drifting off to Möldenghast Blvd, men dumping buckets of barnacles recently removed from the Dockmaw.
-2 to reaction rolls
Encounter chance 1 in 6 per hour
Overhear Rumour on a 6
Chance of Godless: 1%/Turn

(Unless someone is already running screaming to get them, Chance of Godless is rolled per Turn while something is happening in the open that shouldn’t be. Since there is no Deicidium in the Rookery and no one really cares about it chances are low, and there’s every possibility that even if they do show up, they’ll leave you to it. More on that later.)

END_OF_DOCUMENT_TOKEN_TO_BE_REPLACED


How to Make Friends and Imagine People

While there may be plenty of NPC generators already in existence, I wanted one specifically for Cörpathium that I could use to make all of the characters ever. So, I made one?

Since the tables would be unforgivably ugly if I had to reformat them to fit here, head to Penny Pamphlets or click this link to download the NPC Birthing Sac in spreadsheet form. With the amount of tables I use, I’m really finding spreadsheets to be the best thing in the world. Instead of having multiple PDFs or text documents open I can have one spreadsheet with all of the pages I might need, and I can even freeze the headings so that no matter where I scroll I can still see the table name and number. For something absolutely free and easy to use download LibreOffice.

[Edit: everything besides the doubles and triples tables is now also automated here.]

Since my idea of fun does not include a cross-referenced 500 entry table of “Tempestuous, Has Kind Eyes”, “Will Betray You, Smells Like Cinnamon”, and “Hooked Nose, Was Once Bitten By a Sheep”, my generator has you drop a handful of dice for vague descriptors of different character aspects, then take a reaction roll and a random name and imagine the rest. I mean really, we can figure out if they have a weakness for cherry pie and fast women later.

Step One: Every dice has its own table, so scoop all of them into your hot little womb of a hand and roll. If there are any doubles or triples re-roll them on those tables.

Step Two: I have made names for every race in Cörpathium. Every god damn one. Roll d100 once for a full name and occupation or a few times to mix it up. Add an elaborate title if you feel like it.

[There aren’t any demi-humans in Cörpathium, but there are four major ethnicities. The Moors are steeped in mysticism and have near pure-black skin, like polished ebony, with pupil-less white eyes and rich silk clothing dripping with jewellery. Urgoths/Saxons are the pale mongrel children of might-as-well-be-Europe. Francs are like their more effete olive-skinned cousins. The Morgen are pale to the point of ethereality with epicanthic eyes and bullshit Lovecraftian names, when born they’re anointed to the sect of one of their hundred gods instead of taking a family name. Anything deeper about their cultures can be made up mid-game I don’t got that kinda time.]

Step Three: Make a reaction roll. Some of the original rolls should be interpreted with this in mind.

Penelope Clairval is a Francish Cook, and while she may be pushing her sixties her constant food-tasting and activity has kept her tall frame plump, and her clean tight apron frames her pot belly in a way that you find oddly and compulsively attractive. She’s extremely happy to have you here but occasionally has spats of frustration while she’s running around the kitchen regaling you with stories of  her culinary endeavours and how they’ll make her famous throughout all Cörpathium some day. You’d never guess that she’s blind and finds her way around the kitchen by smell and memory alone.

Harbungur Uruman, the Pastel Lord, is a young Moorish boy currently prenticed to the Sewerkeepers, where he is able to access nearly-closed pathways that the older and larger men cannot. He wears clothes too large for his portly little frame, likely passed down from his father, but the jewellery hanging from every available space is decidedly un-Moorish; things either washed into the sewers or long-forgotten, shimmering and strange. He found something down there in the places no one else can reach, something he believes will one day make him a lord of Cörpathium. He doesn’t know how to react to you, he isn’t sure if he can use you, and sways mid-conversation between joviality and disdain. Everything he tells you is a lie, and his young mind still has trouble keeping track of which lies are being told to who.

Cul-Ragaroth Magog is a near-decrepit Morgen Narcotic Chymist, the filth-stained vestments covering his bent, shrunken body are little better than burn-marked rag and he despises you, something he communicates quite clearly through venomous words and unmistakably malevolent movements. Persistence pays off though, because if you can talk your way around his hate and the overpowering scent of rose-water he uses to mask his chemical experimentation, you’ll discover that he knows about everything.