An Array of Specimens Tagged as Fungus

Thankyou for your query regarding poo, and its inherent ability to form a portal through which fungal worms may be summoned!

The sensation you describe running up and down your body is in fact the molecules of your very being vibrating at a different frequency in order to allow entrance from the beyond, and should subside within 3-4 days once the fruiting conqueror has settled within the new confines of your flesh. In the meantime, it would be wise to refrain from inspecting your rectum in any way, as the sudden appearance of a finger, or leering eyes reflected in a mirror, could be construed as aggression by your new symbiotic god, elevating its rage to fevered heights that would make the very mountains weep.

As in all things, deal with your new guest with softness and compassion, and in no time at all you will begin to reap the fruit that your warmth and poo has sown.

We finally managed to find the time to actually start our Cörpathium campaign again, so we cosied-up the studio, made two jugs of Goblin Punch [lots of apple/lime/kiwi/banana/mint juice and lime and pineapple soda water and vodka and… look lots of sugar and it ruined me for the next day and I lost my voice around the 6th hour but it was worth it, it tasted like the mid-point of a party where you’re like, “things could go horribly wrong, or this could be the best night of my life, I’m going to find out”], printed some fresh new character sheets, pulled up the spreadsheet for the Rookery of Van Möldus, and rolled our little hearts out.

I had this idea to start everyone as 0 level and only gain a class when they do something to earn it or find a spellbook they can read or have religious fever dreams or something, kind of like a DCC funnel except with a single character each and let loose in the sandbox instead of a set adventure. Have to say, it worked pretty damn well.

Everyone but Ellen used the automated NPC Birthing Sacs to get an idea for their character, so after rolling for equipment we ended up with:

Rose: Maddock Mohrghast, an imposingly big but weak and clumsy Urgoth that may be mentally touched, carrying a sharp copper blade, a bottle of dark “bog” alcohol (that apparently he’s had since he was 7 and it grew his finger back? I don’t know they made that up while I was in the bathroom), two discarded censer balls from the Church of Dust and Ash, a leather satchel with charcoal pencils and half a notebook, two days worth of preserved rat, and a small collection of mouse skulls.

Michael: finally rolled an Intelligence over 5 (well, not on the first try but I let him roll them all again), Elena Sanguine, a petite Francish girl missing an eye, carrying a black blade and a tarnished brass looking glass full of creeping fungus.

Bulletpoint play report after the gameporn. 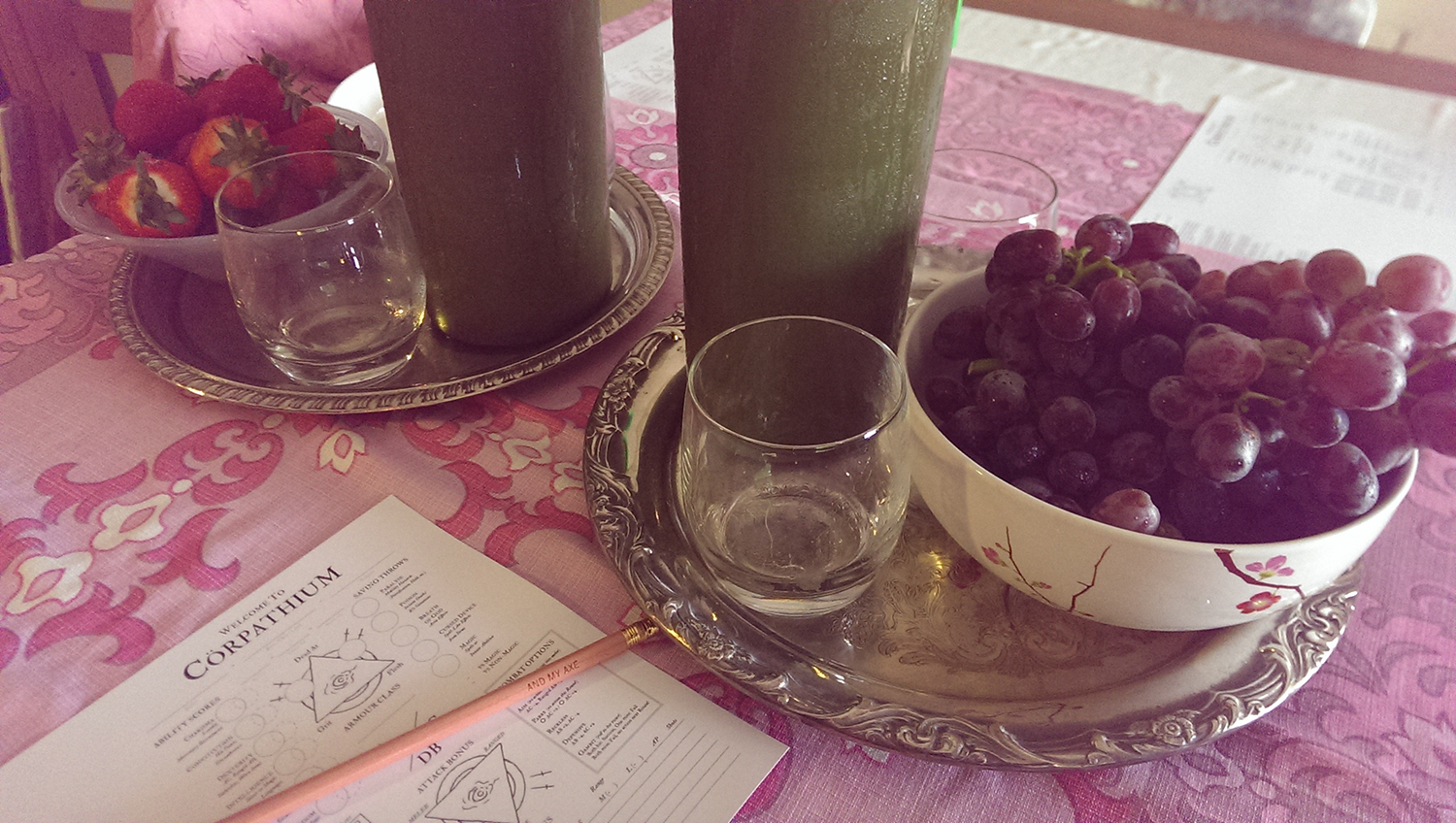 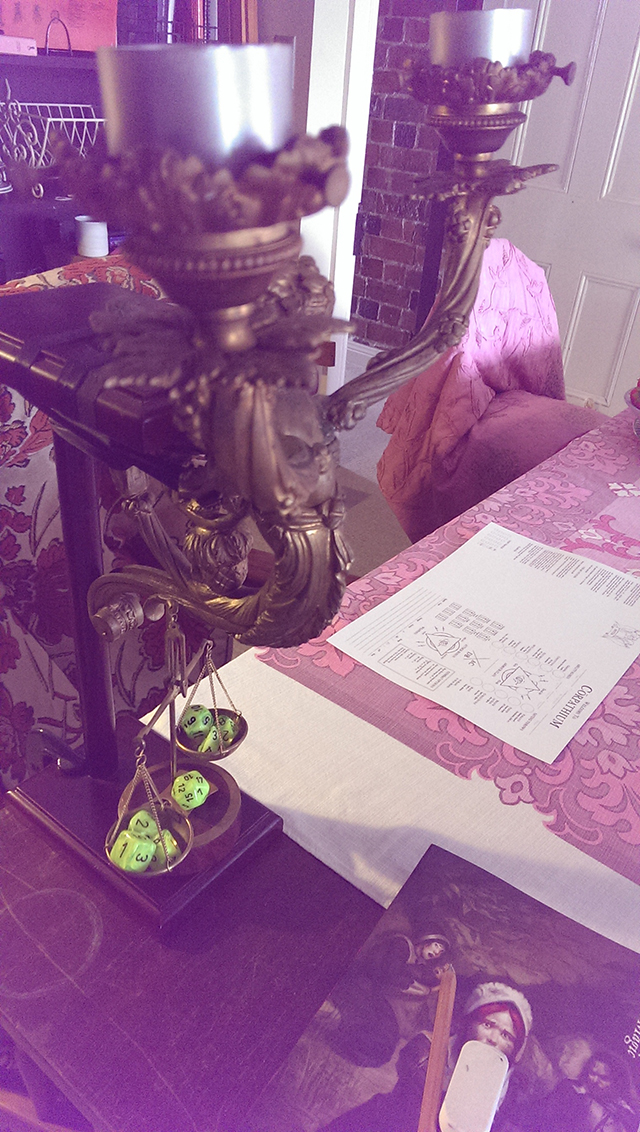 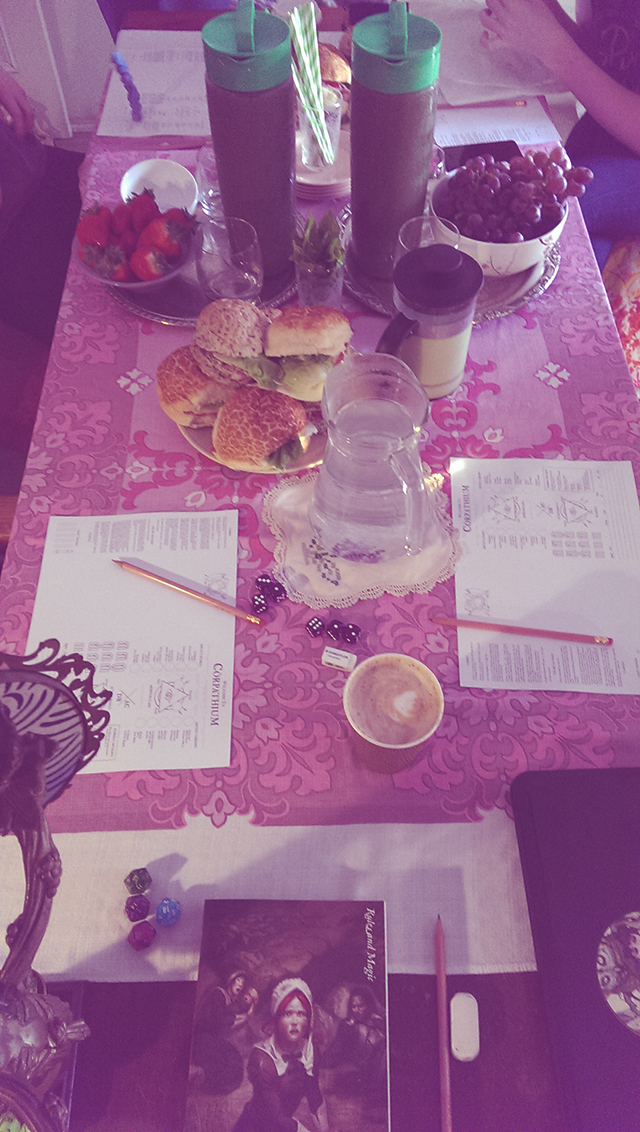 END_OF_DOCUMENT_TOKEN_TO_BE_REPLACED

You’ll smell them before you see them, saccharine amongst the musty bowels of the earth, inviting beyond belief. Despite the look of their lurid violet caps, marred with collapsed spots like a cancer, they are the most delicious thing you will ever eat while hidden away from the sun. Belly full, licking deliquescent honey spores from your fingers you’ll walk away without a second thought for the fruit offered up to you by the earth.

Until the second morning.

Overnight the Honey-Veiled Recursive Webcap bears forth from your own skin in a violet splay of fruiting bodies. It does not itch, it does not burn, the fungus has grown to exist in harmonic mycorrhizal symbiosis with those that consume its fibrous flesh. As you bear it throughout the underworld dripping its honeyed spores it absorbs the nutrients it needs to survive not only from your body but by the things you inadvertently splash upon it, and in return provides you with a portable, infinitely renewable food source grown from your very flesh.

After the 5th meal, save vs. Poison each time you gorge on the webcap.

First Failure: Lack of carnage exhausts you. You don’t care for exploration and hidden secrets, gold has lost its sheen, you want contact with flesh, you want spilt blood. Insects crawl across your skin and you seem not to notice.

Second Failure: Mycelial hyphae crowd your nervous system, touching your brainstem like nervous teenage fingers. The mushrooms provide everything you need, why would you want to eat anything else? The simple smell or vivid description of ordinary food and drink makes you retch.

Third Failure: It’s difficult to see your skin for the fruiting bodies, they thrum together as you walk, creating sprays of tiny spore droplets that mist around you, it would be beautiful in a backlit slow-motion close-up.

Fourth Failure: Your body is so riddled with mycelium it can hardly bear the strain of movement. You lack the strength to force flesh down the throats of your companions. And so you seek a cool, dank place to lie down, secret enough to avoid destruction, accessible enough for the fruit of your rotted remains to be stumbled upon by the next sporebearer.

Your honey scent drifts on beneath the earth. 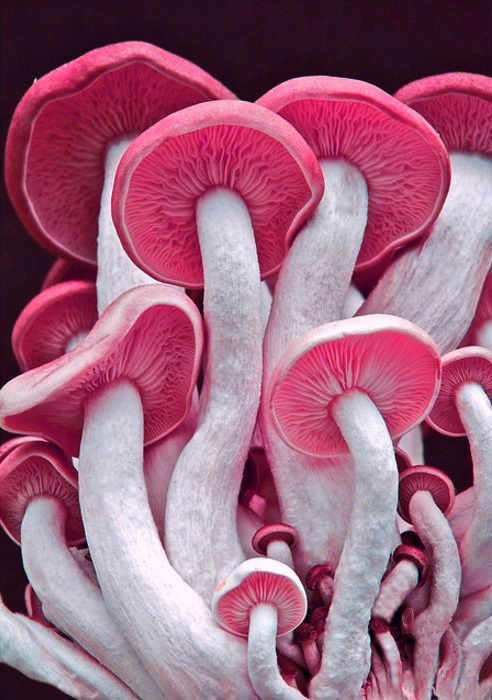 [Originally written for Underworld Lore #2, as disgorged by Gorgonmilk]