Whhh okay, deep breath, this is going to be a big one.

M. John Harrison’s Viriconium was one of the big inspirations that brought Cörpathium into existence, and one of the things that I loved most about those stories was that the city was never the same; places move, facts shift, but it remains Viriconium. So that’s something that I wanted for mine, a city that could be destroyed and brought back without just hitting a reset button, and is why my magic mishap and city encounter tables are so gleefully full of potentially world shattering stuff: I’ve never been worried about having to start again, it’s fun if everything gets torn down.

But at the same time, I’m not writing fiction here, I’m writing things that need to be used. Actually throwing everything out and starting from scratch would be an insane thing and a huge waste of my time.

So, my answer was to write up twenty potential boroughs, a method for randomly generating the entire city with a dice drop, and conditional variations based on what boroughs end up existing and which dice generated them.

First you take a 7 dice set and 5 other d20’s in your hands (or more if you like go nuts) and drop them in front of you, trying to keep them reasonably close together. 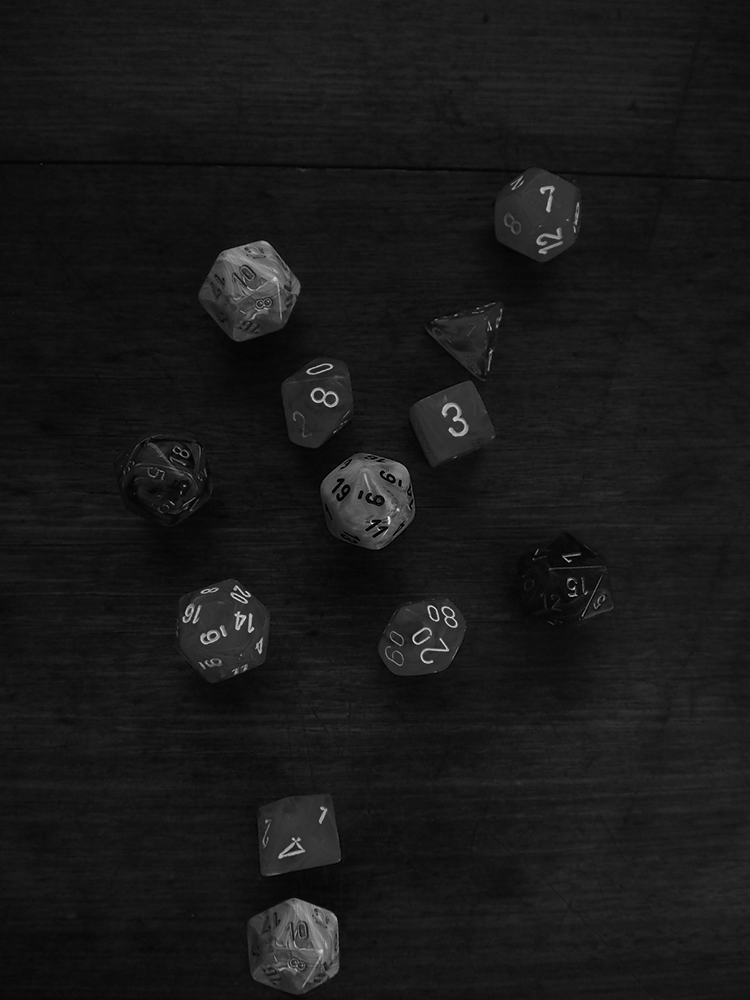 Each dice represents a different borough. Their position doesn’t necessarily show the physical layout of the city, just how the boroughs relate to one another.

You take the points of the shape on the top of each dice (well, just the points for the d4, and for the d10’s pretend they have a triangle on top), and if that leads to another dice, those boroughs are accessible to each other, which ends up looking like this: 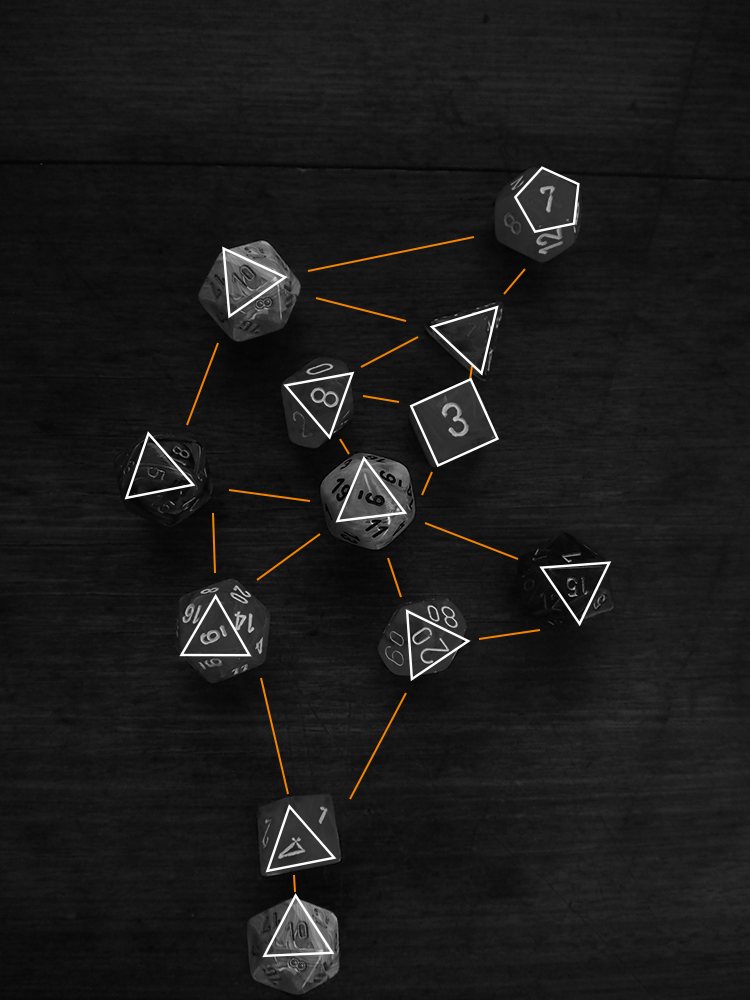 Now the numbers on each dice relate to a different borough on the table below. Go through the 7 dice set first, beginning with the d20, then move to the highest number of the other d20’s. If you get a duplicate number, replace it with the next lowest number not already taken by a smaller dice, and if all the lower numbers are already taken, roll on the Additional Undefined Boroughs tables.

(Clicking any of the borough names will take you to its full description further down the page.)

There are also some constants regarding Cörpathium: 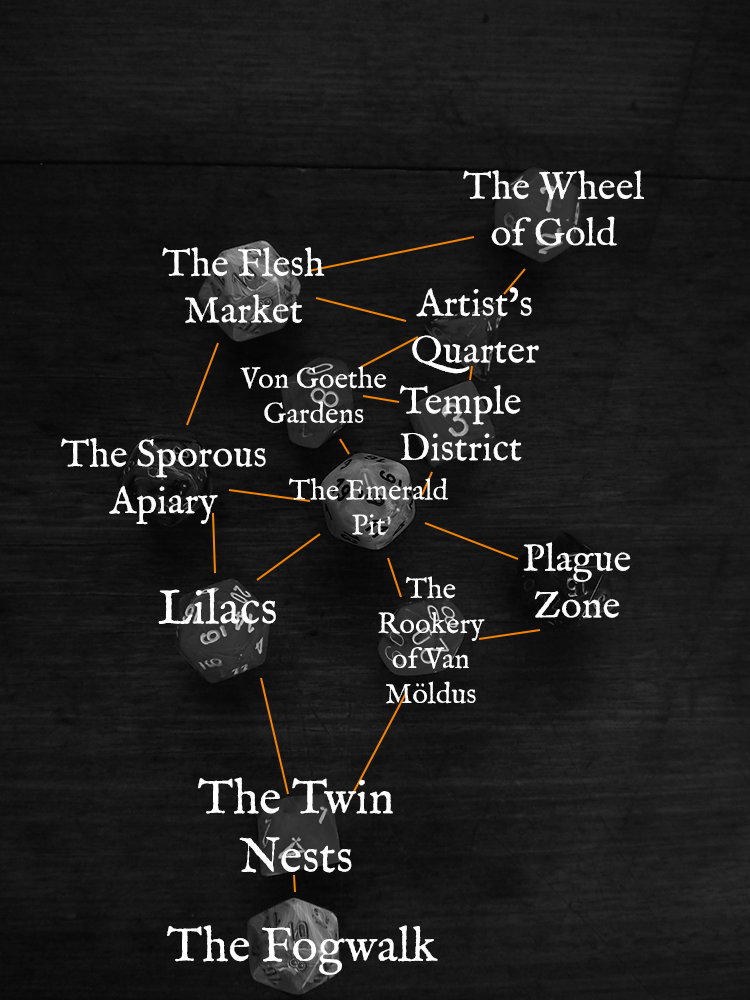 Cörpathium’s government and law enforcement depends on what boroughs actually ended up existing in this iteration of the city, so you start at the top of these tables and pick the first one that applies:

Which in this case means that Cörpathium is ruled by the Corvuscult and guarded by the Godless.

The Emerald Pit (in the centre there) still needs to be in an actual borough, which is where the Additional Undefined Boroughs tables come in:

Which I roll on and get a poor borough, The Drowning Mass: Inhabited below the streets in the sewers and tunnels and carven halls, the lavish buildings above abandoned to superstition.

Which means I need to roll a rich borough to go on top of it and get Báthory: The cobblestones are carved like the beautiful faces of youth, scrubbed daily to shine by hump-backed cleaners.

And a great city needs great entrances, so here’s a few that can be put around anywhere that makes sense (well except for The Tributary which should be put at the opposite end to the Fogwalk so that it can be next to the Corpusmilch as it enters the city):

Which after I think maybe half an hour including messing around in Photoshop, gives you a city that looks like this: 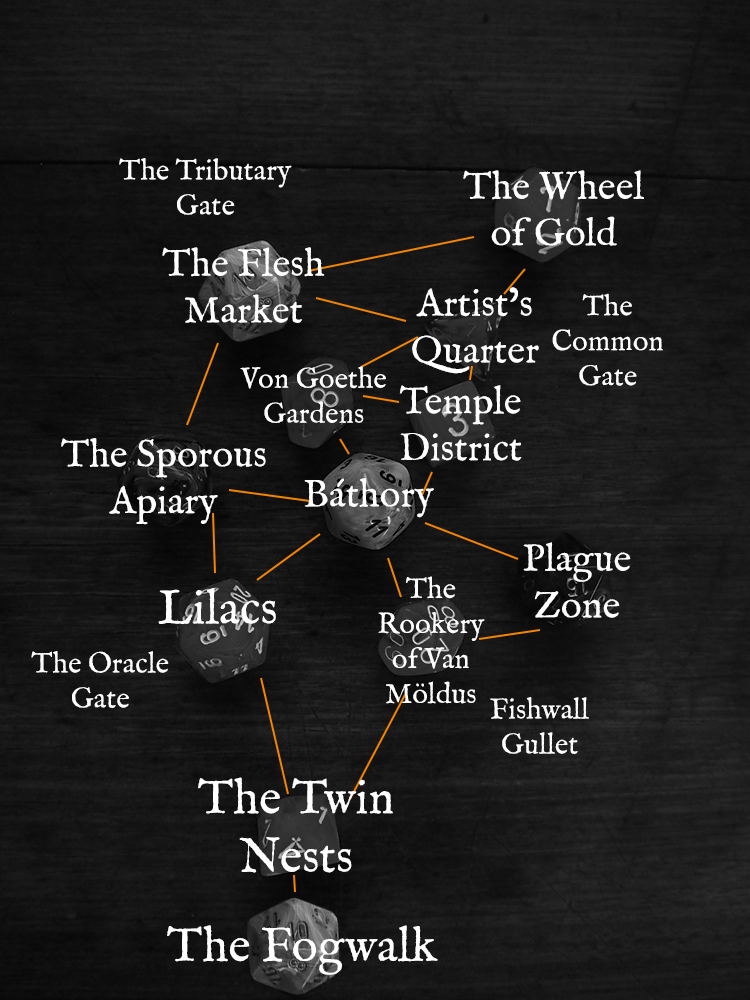 The actual dice that generated each borough also determines another variation, which you’ll find in the Dice Variance tables below. I’m not going to list all of the ones I got here, but among other things it did result in a huge flesh giant being under construction, and the in-vogue religion being Yoon-Quiun, most hated enemy of Roy’s snake worshipping Mystic, which I think is pretty funny.

Anyway here are the full borough descriptions. Really most of these could be used as cities all by themselves, they don’t have to be in Cörpathium. In fact after generating the city above for our current game, one of the first things I did was decide that the the Sulphurous Spires wrapped around the Demiurge Pit would be a whole other city to visit.

The Additional Undefined Boroughs could also be used for extra neighbourhoods outside the main walls or to pop up unexpectedly if you travel down an unfamiliar path or whatever you want.

Really, I’m incredibly happy with this, it feels like nose to tail cooking in RPG form and I love it.

2. The Rookery of Van Möldus

7. The Wheel of Gold

11. The Sulphurous Spires (of the Serpent)

17. The Blood-Red Palace of the Godless

18. The Demiurge Pit, Crater of Life

20. Manifestation of the Monolith in the Dark

There’s also going to be a set of landmarks for each borough, but that’s not quite finished yet, so you’ll get that later.