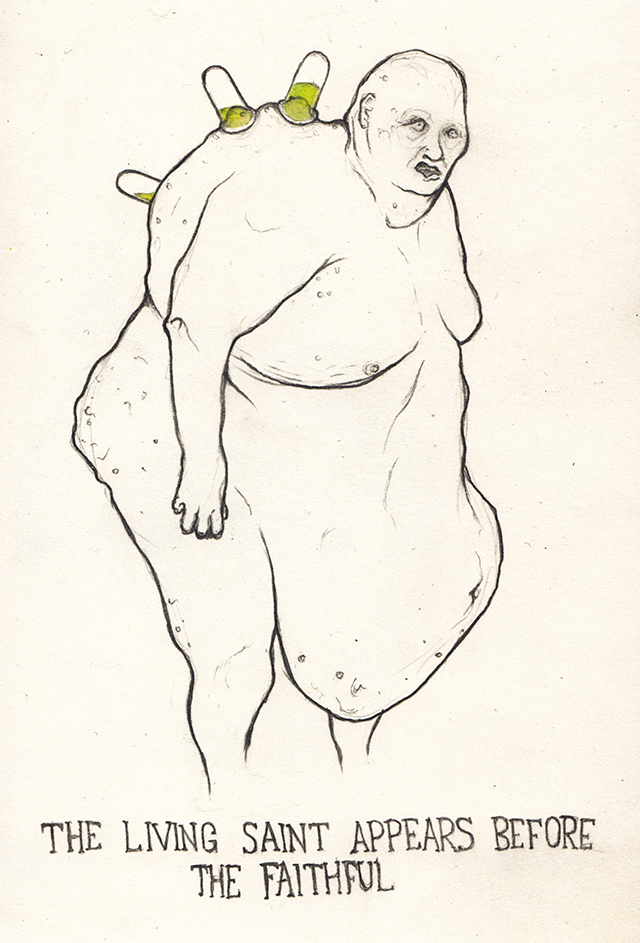 Womb of the Wounded Wretch (inspired by Protest the Hero – Wretch)

A fertile mother of gods, mutilated and no longer able to conceive.

Sometimes a woman’s pregnancy stagnates in their 8th term, they have prophetic dreams of the terrible glory of their child and of the Wretch who has blessed them. Some choose to become Wombs.

In a constant state of pregnancy, their divine power comes from the foetus they carry.

The Wretch is a real being, but the maddening thing she is gestating inside the Womb is no god.

If successful 1d6 + caster level beings hear nothing but the agonised cries of offspring of their species and flee either to escape the sound or find the child. The Womb can continue to roll every round until she fails or the ritual ends.

While the Womb remains in place performing the ritual, other beings, including her companions, cannot stand to be within 10′ of her until the ritual ends.

Creatures that do not produce children are unaffected.

A result of “D” means they hear the sound of the Womb’s child and flock to her, understanding her through the child, willing to do anything she wishes until they perish. Anything.

Covered in dark, angry welts and boils, host to what they see as the physical manifestation of their strange god.

Bearer of the Catharsis Censer

If successful smoke billows outwards from the Symbosiate in swirls and waves, and 1d6 + caster level beings that breathe it in find there are things crawling inside their lungs, through their veins, around their brain.

Chemicals released by the things crawling inside them trigger a breakdown of emotional walls, some become hysterical, others enraged, some wail and lament until their throats bleed. Repressed memories and feelings, not entirely their own, are torn to the surface and those affected are paralysed by overwhelming emotion.

The Symbosiate can continue to roll every round until they fail or the ritual ends.

When the ritual ends some of those affected will be ruined by what they were forced to experience, while others will have been given a new lease on life, purged and made new.

While the Symbosiate remains in place performing the ritual, other beings, including their companions, cannot stand to be within 10′ until the ritual ends.

A result of “D” means the Symbosiate can choose to destroy their minds, or take them on as death-loyal followers.

Lover of Bakhri of the Black Pit, the Leaping One, the Crooked One, Blood of the Harvest

(inspired by Goatsbride by Richard Gavin, from the Fungi anthology)

A divine black goat with a phallus like a snake, constantly engorged, the pupils of its eyes are a void, the ichor of its blood darker and sweeter than wine, reeking the musty stench of carnal knowledge incarnate.

If successful the Lover of Bakhri shakes and sweats and 1d6 + caster level beings are overcome by the dread scent of olde lust. Phantom ghostlights the colour of gaudy new exposed flesh draw them away, leading them on a pilgrimage to copulate in terror with the great Bakhri.

Bakhri’s Lover can continue to roll every round until they fail or the ritual ends.

Creatures without sexual desire are unaffected.

While Bakhri’s lover is shivering in place releasing this scent, enemies are filled with dread and can move no further if they approach within 10′, while allies within 10′ find themselves drawn to the Lover and must save vs. Magic to take any action other than fawning over them.

A result of “D” means those affected collapse in supplication to Bakhri’s lover, begging for all manner of debasement. Bakhri’s lover can choose to flood their senses, killing them with pleasure, or welcome them into his/her arms as a death-loyal harem. Unnatural beings with HD greater than the caster’s level are allowed a save vs. Magic. If successful they do not wish to be debased, they wish to debase.

And there you go.

As with the Maleficar business, I’d like to put together a decent PDF of the Mystic rules and tables. I’d say the Mystics will have a few more rituals by then too.

In the meantime you can download the tables and Mystics from Penny Pamphlets for some good times.