My players love them some arts & crafts, when I give them little map pieces to put together they all get a little bit more giddy and conspiratorial (like with Sleeping Place of the Feathered Swine or STEAL THE EYES OF YASHOGGHUH! which they are playing through right now).

But we were playing a week or so ago and they were divvying out stolen jewellery and codpieces and swapping equipment with each other before descending beneath a swamp and all I could think was “godddd I wish they could just pull things off their sheets and hand them to each other instead of all this erasing/re-writing bullshit”.

And then I realised why not? WHY NOT?? Why am I using ratty lined tables that are continually being scrawled over like an ambitionless mouthbreather? WE HAVE THE TECHNOLOGY. WE HAVE BLUE-TAC.

So I whipped these up before our next game, with a page of the character sheet devoted to worn equipment, and a separate backpack (drawn by Rose forever ago) for the rest: 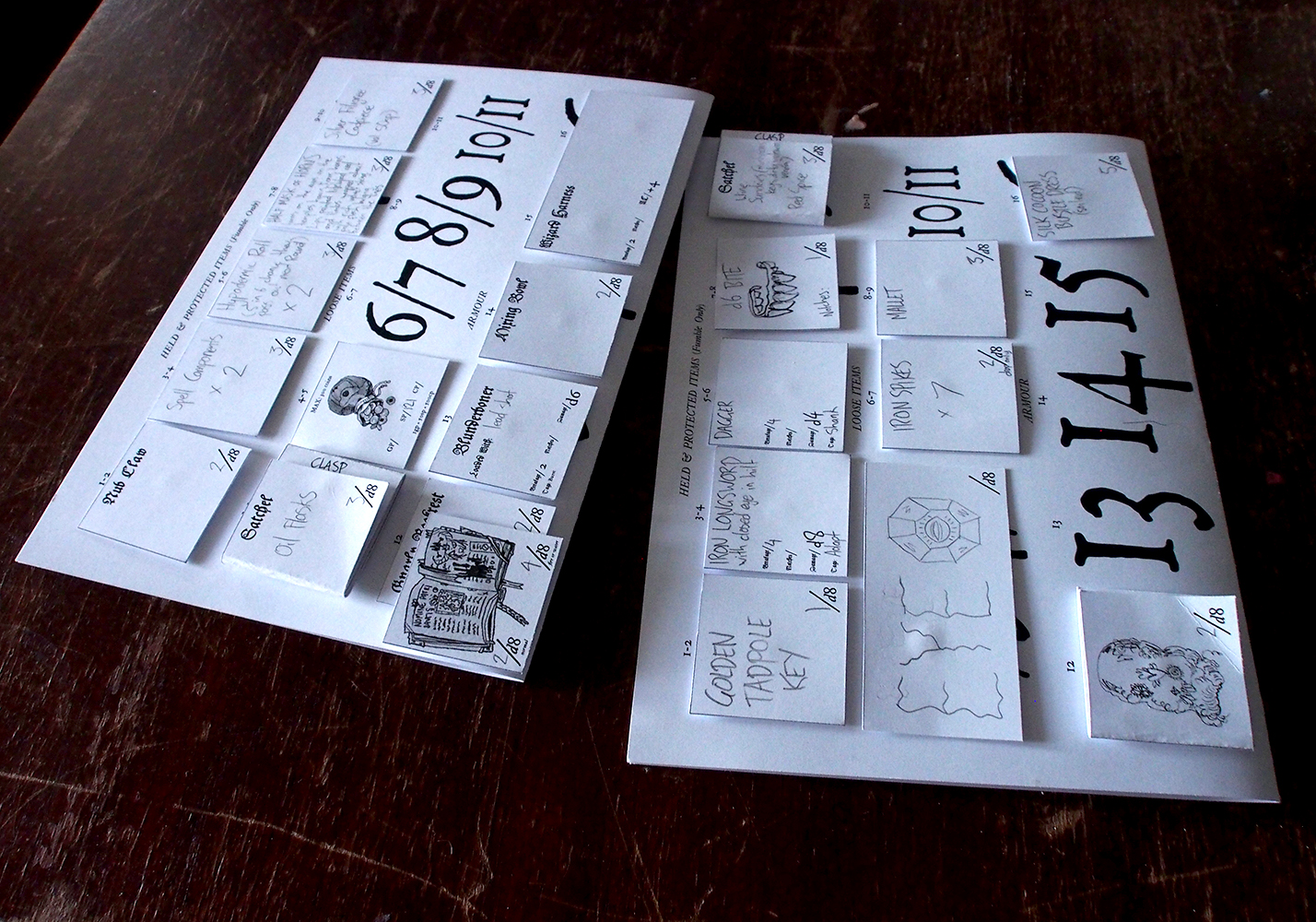 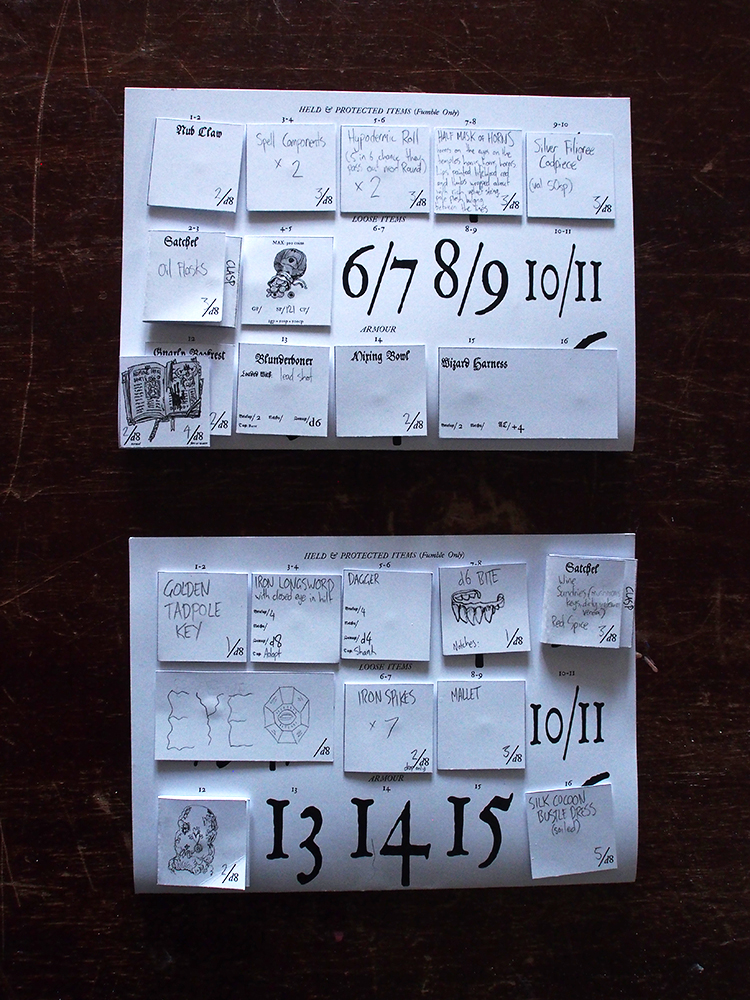 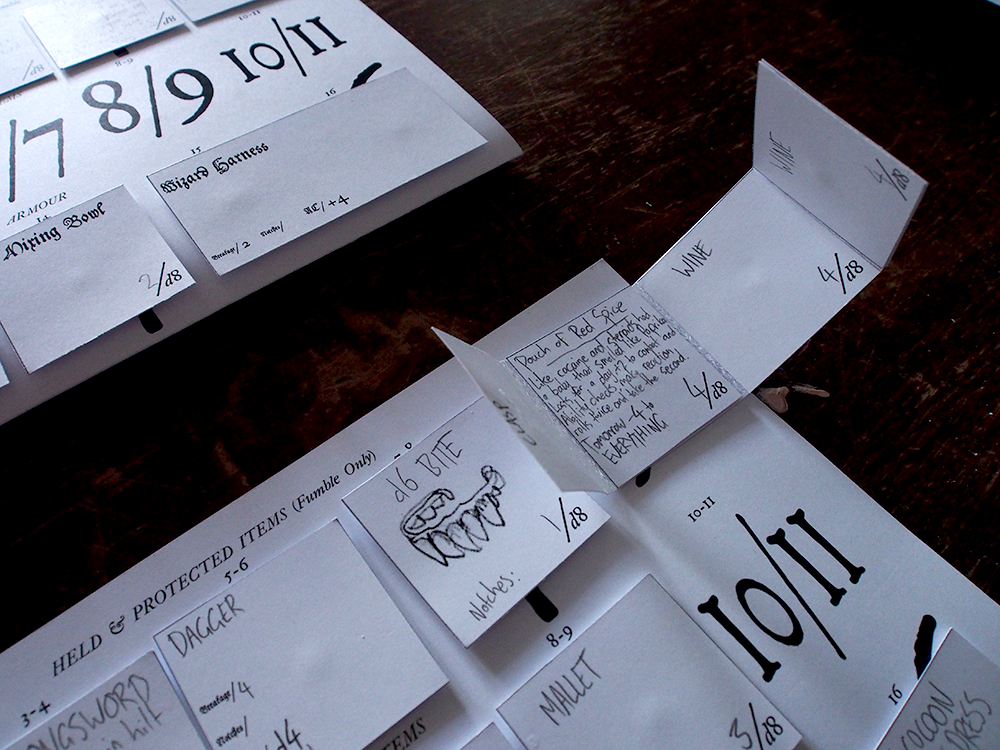 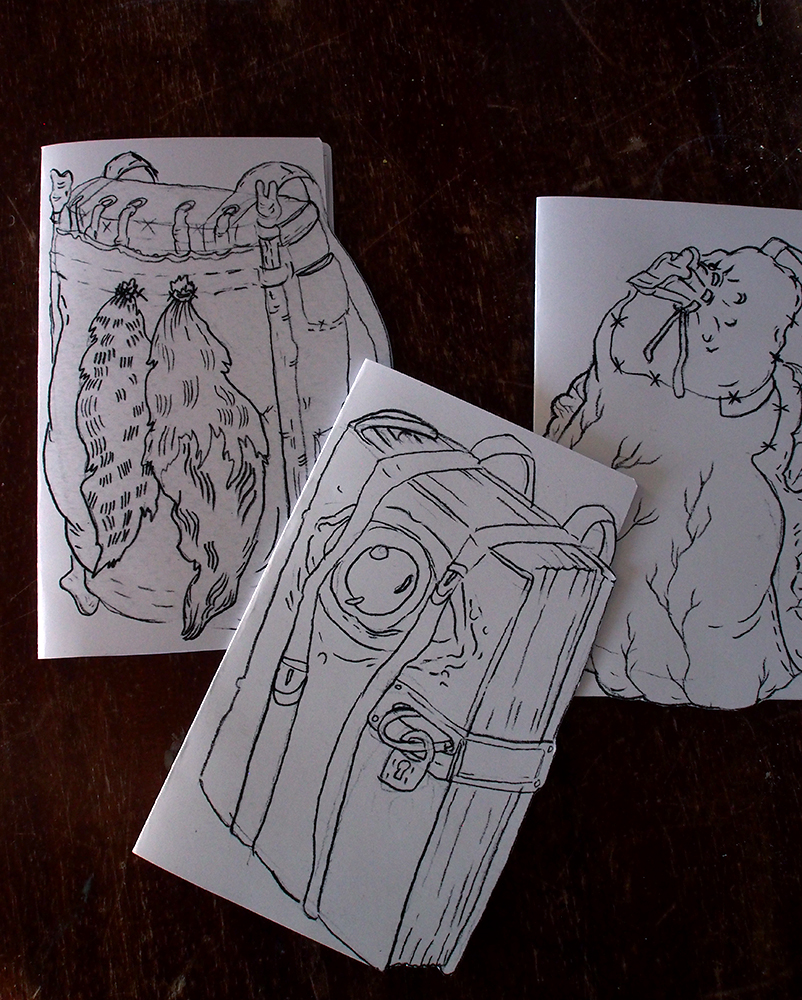 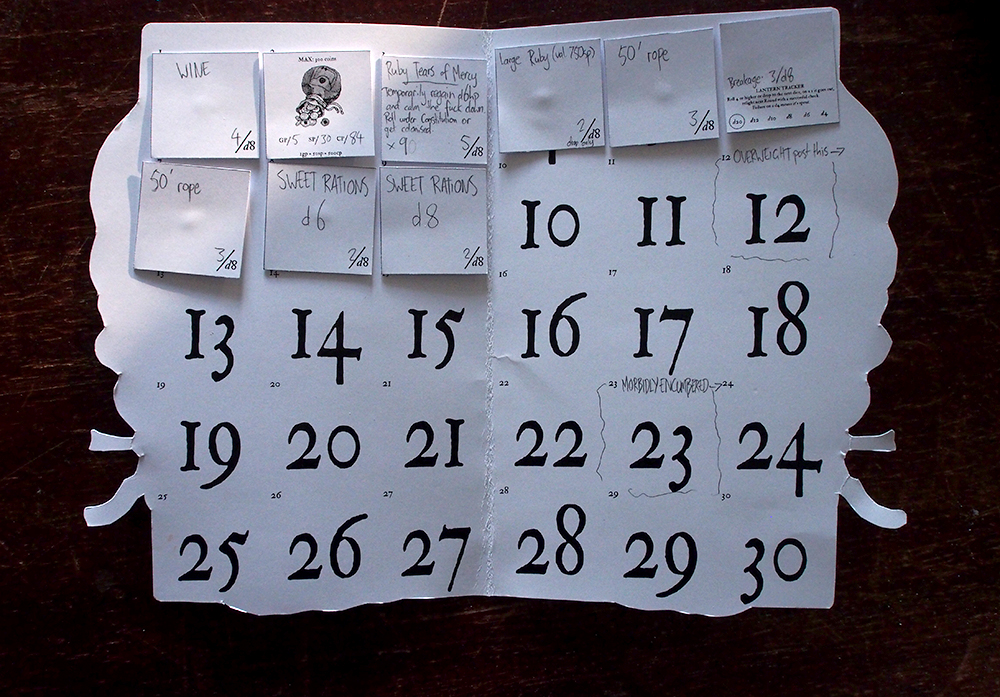 And suddenly they were actually paying attention to what they were carrying and moving things around and watching how close they were to being over-encumbered and I DIDN’T HAVE TO DO ANYTHING TO PROMPT IT.

Really they’ve never understood encumbrance rules properly but make it a bit more tangible and suddenly everything becomes clear and actually a bit fun what?

So hell yes, this is my encumbrance/inventory system now, it makes things so much easier to track, gives heaps of extra room for little details/rules/sweet illustrations, and also means I can do fun things like physically take things away from people when they get stolen or dropped or turned into spiders.

I feel dumb that it never occurred to me before.

Jeff Russell was lamenting about not being able to do this in online games and I ran off at the mouth about using Pinterest for it, which is actually a super good idea.

If everyone playing makes a Pinterest board containing a pinned picture for each piece of their equipment and then shares it with the other people playing, they can then move items around/be given stuff/drop stuff/whatever.

The dice are on there because I bought Emma the most metal set I could find and she now carries them around in her purse but she doesn’t know which one to grab to make Malatesta cut someone in half.

My encumbrance rules have changed a little to go with this so they now work like this:

My other encumbrance rules work pretty much the same as before but with some different conditions that apply to encumbrance levels (Movement Dice explained below):

Rolled for chases or when contested speed is otherwise an issue (like when you and the cultist look each other in the eyes and dash towards the slime-spewing altar).

The lowest Movement Dice of the group can also be used for random encounter checks, because if you’re Overweight you’re shuffling and jangling around like an idiot, as opposed to the guy padding around with nothing but a sack and a knife like an agile agile cat.

When crossing an area is difficult/dangerous/time is of the essence (like a room full of angry sludge crabs or something), you could also set the room a total movement number that the group has to reach before they cross it, and every Movement Dice roll takes a Round (so the Morbidly Encumbered idiot on a d4 Movement Dice is probably going to get nipped by a lot more crabs than the previously mentioned sack and knife guy on a d8 Movement Dice).

I haven’t tested that but it seems sound in theory?

And then hey that feeds in nicely to..

So after scaling a 50′ wall carrying Dead Weight there’s a chance you’re going to feel Overweight until you’ve had a little rest, and if you’ve been waddling around Morbidly Encumbered all “it’s okay if a monster shows up I’ll just drop my bag”, there’s a chance that when you drop it you’re not going to feel any more refreshed and suddenly regret your life decisions.

Apart from that there’s a bunch of other rules changes/tweaks on there so..

Rather than keeping each weapon type with its own special rules I changed it to weapon tags so they can get stuck all around.

Off-sheet I’ve been playing around with ranged weapons a bit to give them more obvious benefits/trade-offs.

When you get hit by a ranged weapon it bypasses Grit and goes straight to Flesh (the hit points where you really get hurt), so shields should be kind of a big deal.

Small shields give +2AC, large shields give +4AC but unless you’re a Fighter you can’t pair one with a melee weapon unless your Strength is at least twice as much as the weapon’s damage.

(Contested melee means that even with an extra +4 defence you’re far from unhittable.)

Using a shield is like dual-wielding weapons, so each Round choose between the AC bonus, or making an extra d4 damage bash attack.

If you make an extra attack split your AB between the two.

(Two attacks while dual-wielding usually incurs a penalty equal to the lower damage of the two weapons, but not with shields.)

300 coins or small gems can be carried in an encumbrance slot (large gems count for 30).

Other than that you can give money to the Merchant Priests who are smugly present in every major city and sometimes in places you wouldn’t expect and always know how much credit you currently hold with them.

If you’re buying something and want to use your credit you can either find a Merchant Priest to oversee the transaction or leave a blood-sealed slip of paper with the shopkeep to cash in later.

Of course if you signed it for more than you’re worth the Merchant Priests will find you where you sleep and croon about ethics in the dark.

Buying/tracking rations exact to the day is boring and I am having none of it.

[Similar to what I do for torches, inspired by the cascading dice ammunition rules by Intwischa (sadly no longer in existence, but the page is currently available via the Internet Archive)]

You can only have one of each and they’re purchased in increments from lowest to highest.

Each one takes up an encumbrance slot, and costs twice as much as its dice size in silver pieces.

THIS IS FOR THE WHOLE GROUP NO MATTER HOW MANY OF YOU THERE ARE.

Each day try to roll 4 or higher on your largest Ration Dice. If you fail, that Ration Dice is gone because you’re fat.

If you also have animals you have to roll 6 or higher.

By LotFP rules if a Specialist fails to pick a lock they can’t try again until they gain a level because they’re not good enough, which feels… dumb?

Specialists can now try as many times as they want, but after the first try, they have to check their tools for Breakage after every failure.

Inspired by Reynaldo’s BREAK!! updates, books now come with a rating 2-6, and can be used in place of your own skill rating to make checks to do with that subject if you’ve got the time.

(e.g. there’s this big pulsating sac thing in the corner and you’d like to know what it is but your Naturalis skill is only 1 in 6, however you’ve got this big Creepy Crawlies book with a 3 in 6 chance…)

Successful skill checks using books also count towards trying to increase skills when you level up (when you level up, if you’ve successfully used a skill try to roll under your number of successes on a number of d6 equal to your current skill level, if you succeed you gain another skill point).

Are GONE. That kind of consistent steady improvement just didn’t really jive with what my game is about.

Instead, everything is done with Ability checks now.

A normal check needs to roll equal or less than your score.

A hard check needs to roll equal or less than half your score.

If it’s something easy you wouldn’t be making a check.

Ability Scores in my game are pretty malleable, since they can be decreased by nasty stabbings, mushroom infections, turning into a drugfiend with opiate fluids… So when you level up you can try to increase a number of scores equal to the level you just reached.

Roll 3d6 and if it’s higher than your current score, increase it by 1.

I’ve also got this idea for gaining levels (because gold for xp has never tasted right to me) where to level up you need to tell AMAZING BUT TRUE STORIES about your exploits in major cities or places where you can make a name for yourself (number of stories equal to the level you’re trying to reach).

Which is a nice built-in incentive to seek out completely bizarre shit apart from just “there might be gold there”, as well as more social interaction/climbing.

I’ll probably do up rules for the chances of stories being accepted/appreciated in different places (town square, dive bar, high tea), along with potential consequences for those places (rabid admirers/rivals, being overheard by the relatives of people you’re bragging about stealing from/murdering, job offers, gaining more and more elaborate titles), which means leveling up also feeds into more game fodder and makes reminiscing about fun sessions an actual mechanic of the game itself.

Which I think is pretty great.

Wait where was I…

Oh yeah, having item cards and blue-tac for your inventory is excellent and you should try it.

Leave a Reply to Last Gasp