First of all, Gus L has mentioned getting rid of leather, chainmail, and plate in favour of Light, Medium, and Heavy armour over at Dungeon of Signs a few times now. Which happens to be one of the things I really liked in the one game of Gamma World I played. I’d much prefer players to make up exactly what they’re wearing and apply an appropriate armour class than say they’re wearing chainmail and leave it at that. It also links in well aesthetically with LotFP’s existing weapon list.

Speaking of, in general I’m pretty happy with the LotFP weapon list, being that it consists of a few specific weapons and then Minor Medium Large Great make up what it is it does this much damage okay. No fuss, no muss. But. I’d still kind of like for the choice about what your Medium weapon actually is to make a difference beyond flavouring, without turning the weapon list into a 10-page section.

So, the size categories stay, that’s your damage, but depending on what the weapon actually is you also get this..

Sword: If you haven’t been hit this round roll twice for damage, take the best.

Hammer: When you attack choose +1 vs. Medium or better, or a normal attack which

reduces Heavy AC by 1 but deals half damage.

Axe: Minimum half damage vs. Light or less.

to disarm on hit. On any miss roll under your AC or hit yourself.

The reasoning being that swords are versatile, hammers can punch through with spikes or crush joints to reduce mobility, axes are built for chopping right into things (my thumb can attest), and flails.. well flails is flails.

[Edit: these and the Notch rules have been updated in The House of Rules]

That’s Not A Knife..

I use group Initiative, but would also like characters who have an Initiative bonus to get some kind of benefit from that. So, different kinds of weapons have benefits in different situations.

At this point I’d like to mention that this and the weapon categories were inspired by a couple of things mentioned by Brendan Strejcek, now of Necropraxis. In fact the dagger part is stolen directly from him and Gus L.

Another Notch on the Axehaft

I find it really boring for characters to be able to pick a weapon when they start out and then hold onto it forever unless they find something magic or wake up naked in a pit. I mean sure, it’s nice to have a weapon with history, but don’t you want that history to actually mean something? I also want some kind of indication that all this murdering necessitates equipment maintenance, but I don’t want that to be a gaping pain in the arse.

Every time you roll a 1 or 2 to hit in combat your weapon takes a Notch, this doesn’t necessarily mean it was damaged just then, more a simple way of quantifying wear and tear.

Each weapon can take Notches equal to its damage die (so a dagger can take 4 Notches, a long sword can take 8, Lumpy Space Princess’s knifemace can take 10).

Once the weapon has 2 Notches, roll 2 of the weapon’s damage die after every attack, if the roll is equal to or less than the number of Notches, the weapon breaks. So you might embarrassingly break your axe with a wild swing against the wall, or you might snap your dagger off in the merchant priest’s chest.

If the weapon takes another Notch after it has reached its limit, it breaks.

Now, armour makes it harder to hurt your squishy parts, fair enough, but what about the armour? Every time an attack against you rolls 19 or 20 your armour is damaged, reducing your AC by 1.

Prices are subject to review and gouging.

[Edit: Go read Brush of Fumbling’s excellent post that works weapon quality into Notches if you’re tired of brooms being as durable as battleaxes and all of your blacksmiths being the same guy with a different moustache. I’m using it effective right now.]

When you have to walk around with everything strapped to your back, economy of utility can become pretty important, and getting hold of something that actually performs more than one function may just make you fall to your knees for a bit of an ugly joy cry. Credit for sparking this particular thought fire goes to Tom at Middenmurk.

Fuck your +1 sword, give me a shield with a lantern in it and big spikes sticking out of it.

Basically, coveted equipment doesn’t have to have some bullshit charm on it, it just needs to be uncommonly useful for the kind of foolish things you’ve chosen to run around doing.

I’d rather carry an iron cresset than a torch, it burns just as long, using pitch, rosin, or pine knots, and if someone jumps out of the dark I can beat them with it for d6 damage. As a bonus on 18-20 they also catch fire.

10′ poles are useful but DAMN are they unwieldy to just lug around. Why not carry a 10′ spear or polearm instead, with several interlocking foot long sections at the end that can be easily removed if damaged? Hell, while we’re at it let’s make the top section removable as well so that it can be used as a weapon in close-quarters. Like Tom said, “As is often the case with historical reality, similar business ends are applied to different lengths of wood for different purposes.”

Check Tom’s other article and follow the link to My Armory at the end for more examples. Sure, a lot of them are just things with pistols jammed onto them, but you get the point.

For seriously though, fuck your +1 sword. 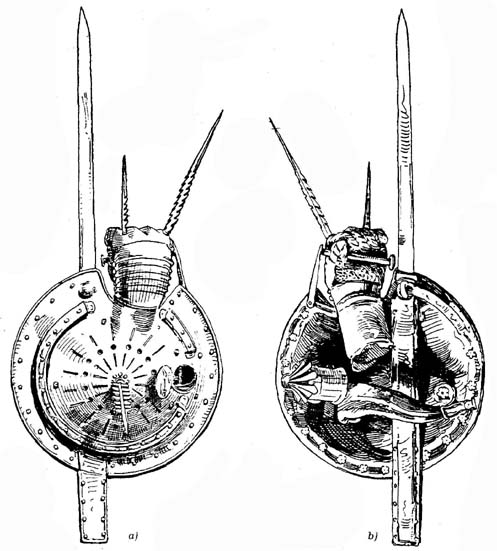