A Collation of Things Revealed in May, 2013

Void Dancers feel hear and see the music colour and flow of the energy all around them. They’re practically magic idiot savants, they can’t Read Magic, they don’t understand it, they just feel it. Void Dancers don’t memorise or read spells, they just need to be able to dance.

They can only learn spells that have been cast around them, be taught by another Void Dancer, or interpret their own. Learning a spell doesn’t cost them anything, but takes twice as long unless they’re alone in the wilderness or somewhere intensely magical. Decrease the time by a day for every time the spell has been cast around them.

They can’t use or make their own Fetishes, but they’ll wear them, they think they’re pretty.

Always roll for their own Cataclysm limit.

Smoky tendrils and hands emerge from the walls or floor, seizing the victim and dragging them back within the wall/floor. This in itself doesn’t hurt them, they find themselves somehow squeezed within the matter of the wall, and they can free themselves with a successful Strength check.

But something inside the wall gnaws and invades their flesh, causing 1d4 damage every round until they escape.

Duration: Until the Void Dancer stops

The Void Dancer’s movements become frenzied and infectious, 1d4+caster level beings must save vs. Magic with a penalty equal to caster Charisma modifier or shudder and shake in cavorting delirium until such a time as the Void Dancer stops.

The Void Dancer can drive another 1d4 beings to save or join the rhythm every round until an attempt fails to lure new dancers.

The heavens darken and break open, spilling a flood of noisome rain and misshapen toads in a 50′ radius. The toads leap onto anyone they can find and gum at their flesh, causing deformities to sprout wherever their awful mouths have touched. The toads will die and rot after an hour.

Knit or unravel d4hp of flesh. (Heal or Hurt)


Pull Back The Sheets

Fold-over Lamentations of the Flame Princess character sheets are available in Penny Pamphlets, as well as some simple henchman sheets for the guy you’re going to be after your current character swells and explodes in vibrant fungal agony.

They’re designed to use my house rules, but if you don’t want to use those rules, uh too bad? 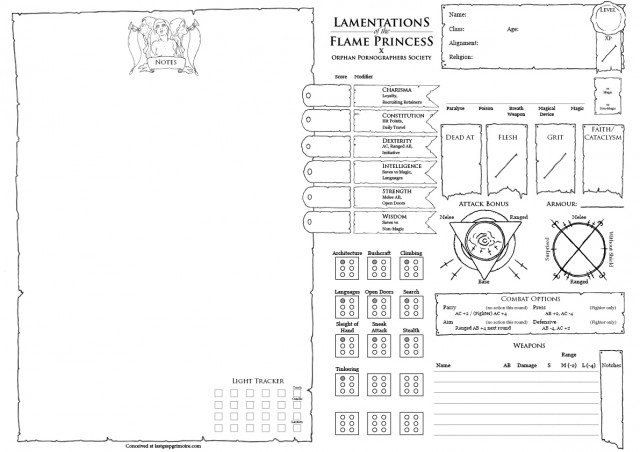 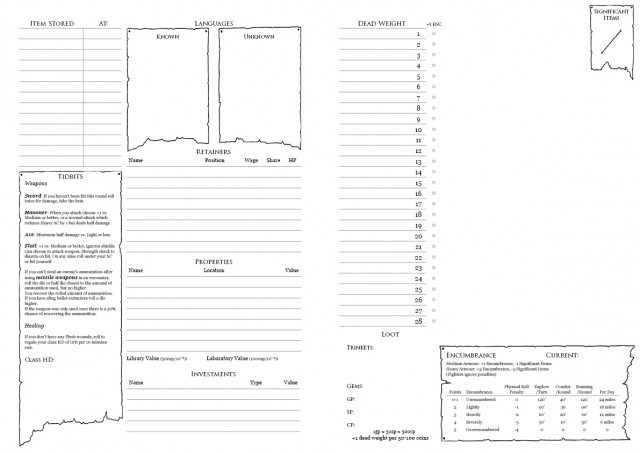 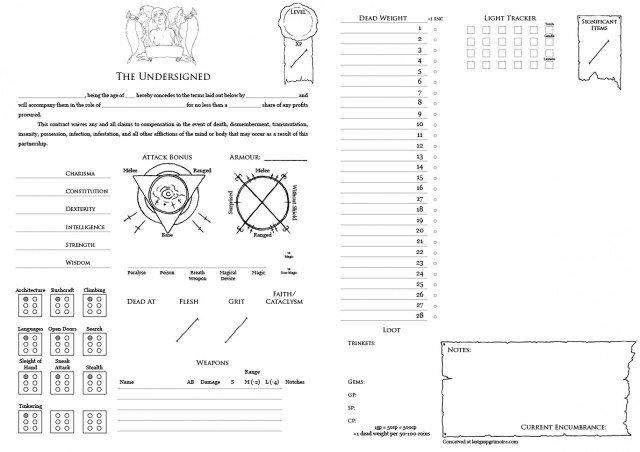 
This Is Weighing Me Down

Encumbrance should be a measure of not just how much weight you can carry, but how easily you can manoeuvre whilst carrying different things, we’re adventuring here after all. Besides that, there’s also the fact that most of the time there’s going to be some things that you want to be a bit more accessible than just sitting somewhere in the big pack on your back.

[Edit: there’s a much better version of this in The House of Rules, thought it doesn’t have a pretty picture.]

The encumbrance system I use requires a touch more maths at character creation, but is a hell of a lot more interesting than a shopping list of crap in a sack. It’s built off the existing LotFP “different items” list and Rotten Pulp/Evil Baboon’s Anti-Hammerspace Item Tracker, and probably a couple of things that have been discussed by Brendan over at Ultimately (now of Necropraxis). It adds a touch of reality and management to the important things, differentiates between characters, but isn’t so complex or restrictive as to make it boring. 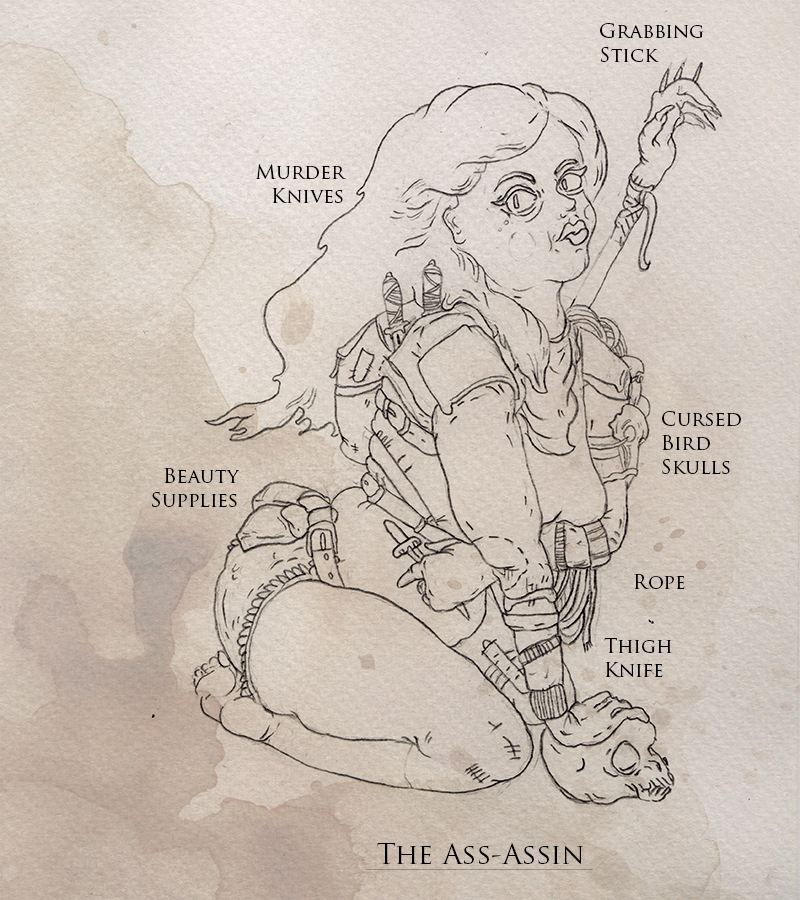 So you’ve rolled up a character and you’re going shopping. Excellent. Let’s start at the top (or skip to the summary if you’ve a short attention span):

What Has It Got In Its Pocketses?

– Everyone is able to wear leather armour and carry a normal weapon without it counting towards anything, because otherwise an adventurer might as well be naked. Maleficar will normally pick up their spellbook before a weapon though.

e.g. Your 50′ of rope is coiled across your chest and you’ve tied a lantern to the end of it, you have a short bow across the opposite shoulder, a quiver of arrows secured to your thigh, an iron-clasped Book of Pestilent Proverbs suspended from a chain attached to your belt, and a sheathed dagger strapped to your left forearm. In addition to that you’re gripping an axe in your right hand and holding a map in front of the lantern light with your left. You’re carrying a normal weapon and 6 other Significant Items (the map doesn’t count), which doesn’t affect your ability to explore or fight because hey: adventurer.

A “normal weapon” would be a d6-d8 melee weapon or a d6 ranged weapon. If you use a weapon that deals d4 or less damage you can carry 2 in place of a normal weapon. Each additional weapon carried on your person counts as a Significant Item, with two-handed and heavy weapons counting as 2.

Feargus the Fanged, assassin for hire (Specialist), carries out his contracts with two daggers sheathed in a small poison-filled bladder on his back. They count as his normal weapon, so he can carry 5 other Significant Items after equipping his Specialist’s Tools.

– Your Strength/Dexterity modifier affects how many Significant Items you can carry. If they’re both positive/negative the highest/lowest applies, but if they’re different add them together and that is the number that applies.

Strength +2 and Dexterity +1 means you can carry 2 more Significant Items than normal.

Strength -2 and Dexterity -1 means you can carry 2 less Significant Items than normal.

Strength +2 and Dexterity -1 means you can carry 1 more Significant Item than normal.

– Wearing Chain or Plate armour decreases your Significant Items by 1 and 2 respectively unless you’re a Fighter.

– You can carry additional Significant Items on your person, but each one adds a -1 penalty to your physical rolls including Attack Bonus.

– In addition to Significant Items you can carry any number of Insignificant Items on your person as long as you can explain where it is. The location of these items is noted on your character sheet.

e.g. In a small leather satchel attached to the back of your belt you’re carrying a pipe and tobacco, 5 copper coins inscribed with your own face are in a pouch hanging from the hilt of your sword, 3 vials of spider venom are tied around your ankle with string, a bronze whistle hangs from a delicate chain around your neck, and a map said to lead to the underground chapel you were born in is tucked into a fold of fabric inside your left sleeve.

– The things you’re carrying on your person count as your first point of encumbrance if you’re carrying at least 3 Significant Items in addition to your weapon, which keeps you Unencumbered within LotFP rules. After that, you can start shoving things into your backpack.

We Should Get a Mule..

– Things carried in packs are considered dead weight. An average character can carry 4 different kinds of items in a pack before gaining a point of encumbrance. Insignificant Items don’t count.

– There will come a point where the Referee (I like to be called the Lamentation Princess) will rule that your set of items is taking up more than one slot. Heavy items always count as separate items.

e.g. The 3 flasks of lamp oil you were carrying up until you pulled them out of your pack and started throwing them counted as a single item, but the twin metallic meteorites you just stole from that cult count as an item each. After escaping, your coin pouch held 12sp and counted as a single item, but after selling the meteorites it holds 190sp and counts as 2 items.

(This takes the place of the +1 encumbrance imposed by LotFP rules, which makes more sense to me. If I start carrying a 10′ pole I’m not going to say “Oh crap you guys wait up I don’t think I can walk so fast anymore”, I’m going to say “Oh crap having this pole tied to me is really awkward, I hope I don’t get attacked because wow, feeling clumsy.”)

– Finding something in your pack during combat takes d3+1 per encumbrance level rounds.

– Becoming Lightly/Heavily/Severely Encumbered incurs a cumulative -1 penalty to your physical rolls including Attack Bonus, in addition to movement penalties. If the encumbrance is due to wearing Chain or Plate armour Fighters ignore the roll penalty.

e.g. You decided you just HAD to pry that last golden lion from the alter, but after stuffing it into your backpack you’re carrying so many things that you’re Lightly Encumbered, and now scuttering sounds are rushing across the ceiling. Until you lose some items you’ll only be able to explore 90′ every 10 minutes, and you’ll be at -1 to hit if you have to fight. (Of course, you can dump your backpack before starting to fight, but heaven knows who might try to take it while your back is turned…)

Like Shields Shall Be Splintered! or Oh Crap, My Hat! but for everybody.

If you are hit in combat you can choose to sacrifice a Significant Item or other piece of equipment before damage is rolled.

If you can explain how the attack removed or destroyed that item instead of injuring you, it happened.

If your explanation is stupid or you take too long not only do you lose the item but you still get stabbed.